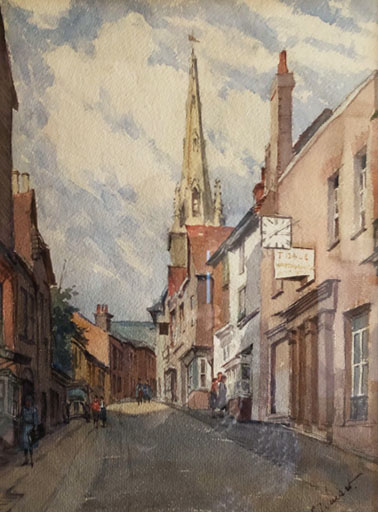 The Petworth Society was founded in 1974. The Society seeks to provide a distinctive voice reflecting tradition and continuity whilst at the same time evolving alongside the town as change takes place.

Apart from the quarterly Magazine, the Society h­olds regular Book Sales at the Leconfield Hall in the Market Square. Other events are held during the year. These may, for example, be talks reflecting local tradition or broader subjects, or walks in the locality.

The Society seeks to work with other Petworth heritage organisations that share its objectives. It has particular links with the Petworth Cottage Museum in High Street, Coultershaw Beam Pump and the Leconfield Hall.

With its founding notion set firmly in the 1960’s the Society’s inception was very much of the 1970’s. The Society was born out of a public meeting held on 19 December 1973. With its architect Colonel Alan Maude in the chair, the Society swiftly became something of an institution in the town.

Growth was dramatic. However age was against Maude. So, in the autumn of 1978, Peter Jerrome, then vice-chairman, took on the leadership role with Keith Thompson as his deputy. This partnership would last through four decades. During this time the Society evolved into an organisation that continues to be much admired by other local groups today. The quarterly Magazine, now recognised as a significant archive of oral and local history, quickly became a staple of the Society.

The Petworth Society is a charity (registered number 268071). The Objects of the Society are: “to preserve the character and amenities of the Town and Parish of Petworth, including Byworth and Edgean; to encourage an interest in the history of the district and to foster a community spirit.” The Society is non-political, non-sectarian and non-profit making.

The Society has a Board of Trustees that oversees the governance of the Society. It also has a Management Committee that has responsibility for running the business of the Society in accordance with its Constitution.

Membership is open to anyone interested in furthering the aims of the Society, irrespective of their place of residence. The Membership year starts at the beginning of March. The AGM is held in the Spring.